Londoners were treated to a taste of Jersey life as Visit Jersey streamed a live sunset into a popular London pub. This event formed part of the successful 360° summer campaign that Oi launched previously, promoting Jersey’s summer offering to Londoners, and focusing on the quick and easy access Londoners have to the island. It highlighted that they too can experience a glorious St Ouen’s Bay sunset for real after only a short flight from the city.

The event was held at Shoreditch pub The Crown and Shuttle and featured a large landscape LED screen covering the back wall of their popular beer garden. As the sun went down in London the bright screen drew attention all around by showing a ten minute countdown to patrons enjoying their after-work tipple. The pre-live-feed countdown was designed to create atmosphere and interest using only a black screen and the campaign tagline “All will be revealed…” At the end of the countdown the screen showed a live stream of a beautiful St Ouen’s sunset, intensified by the perfect weather across the Channel Islands.

Media, bloggers and vloggers were invited to attend the event in support of the campaign. 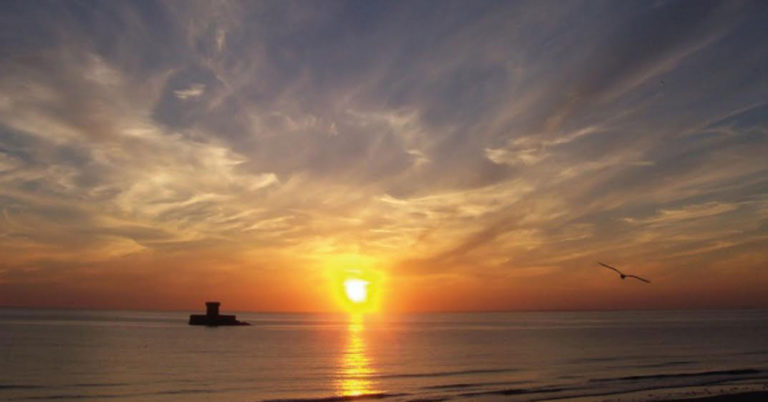 An animation was then shown post-live-feed to emphasise the short distance and easy access to the island which was followed by the summer brand video to give everyone a real feel for the island, its culture and its people.

Promotional beer mats were used to create intrigue, with teaser messaging encouraging people to keep an eye on the screen. Following the exceptionally beautiful sunset, people in the pub were handed a promotional flier which used the clever tagline “From Shoreditch to shoreline in 40 minutes”, highlighting the island’s accessibility whilst also encouraging people to visit the campaign pages on the Jersey.com/360 website and enter a competition to win a trip to Jersey. The competition entry also served as a way to capture prospective visitors’ email addresses for future marketing material.

This short film ran on Visit Jersey’s Facebook channel together with paid Facebook advertising targeted at Londoners. Oi was particularly excited to be involved in this event, which emulated the pride we feel for the island we call home. This marketing campaign was shortlisted for three major national marketing awards – best brand building campaign and best-integrated campaign – at the 2016 UK Chartered Institute of Marketing Awards, as well as Integrated Campaign of the Year (up to £1M Spend) at the Travel Marketing Awards.

Black Friday – for retail only?

Why you should move to GA4 now