The brief
Taj Hotels Resorts and Palaces was established in 1901 and is one of Asia’s largest and finest group of hotels with over 150 hotels, resorts and palaces worldwide. Their UK signature hotels include the 338 bedroom St James’ Court, near Buckingham Palace in London.

With three restaurants, including the Michelin-starred Quilon restaurant, bars, a wellness centre and the award-winning conference rooms and banqueting suites, the hotel had undergone a major upgrade, then re-branded to St. James’ Court.

Oi was appointed to develop, implement and manage the new brand launch campaign in London, specific areas of the UK and targeting international source markets such as America.

The launch campaign needed to position St James’ Court as a slice of the past served on a contemporary platter, perfectly placed between Buckingham Palace and the Houses of Parliament in Westminster.

The process/strategy
Our team designed their launch campaign – ‘An English Classic, Reinvented’. In keeping with Taj’s positioning of reinventing tradition and bespoke luxury, the outdoor campaign featured a metallic gold printing finish on all artwork keeping every element classic and elegant. As part of the campaign we reinvented the book cover designs of many English classics including Sherlock Holmes, Alice in Wonderland and The Jungle Book skillfully designed with the hotel’s brand colours of gold and teal.

Out of home advertising ran across escalator poster sites at Heathrow airport and London Underground sites near the hotel, as well as on London buses and full wraps across a fleet of London black cabs.

Digitally, the advertising campaign ran across online banner advertising on websites such as the Londonist.com and the Economist.com (in the UK and globally). Oi ran a blend of creative executions across the Economist.com achieving some of the highest click-through rates seen by the publisher.

Oi created, launched and managed a major Facebook photograph competition called ‘London is Grand’ as part of the campaign. Visitors uploaded their favourite photograph of London for the chance to win prizes that included a stay at the Taj Exotica Resort and Spa in the Maldives. 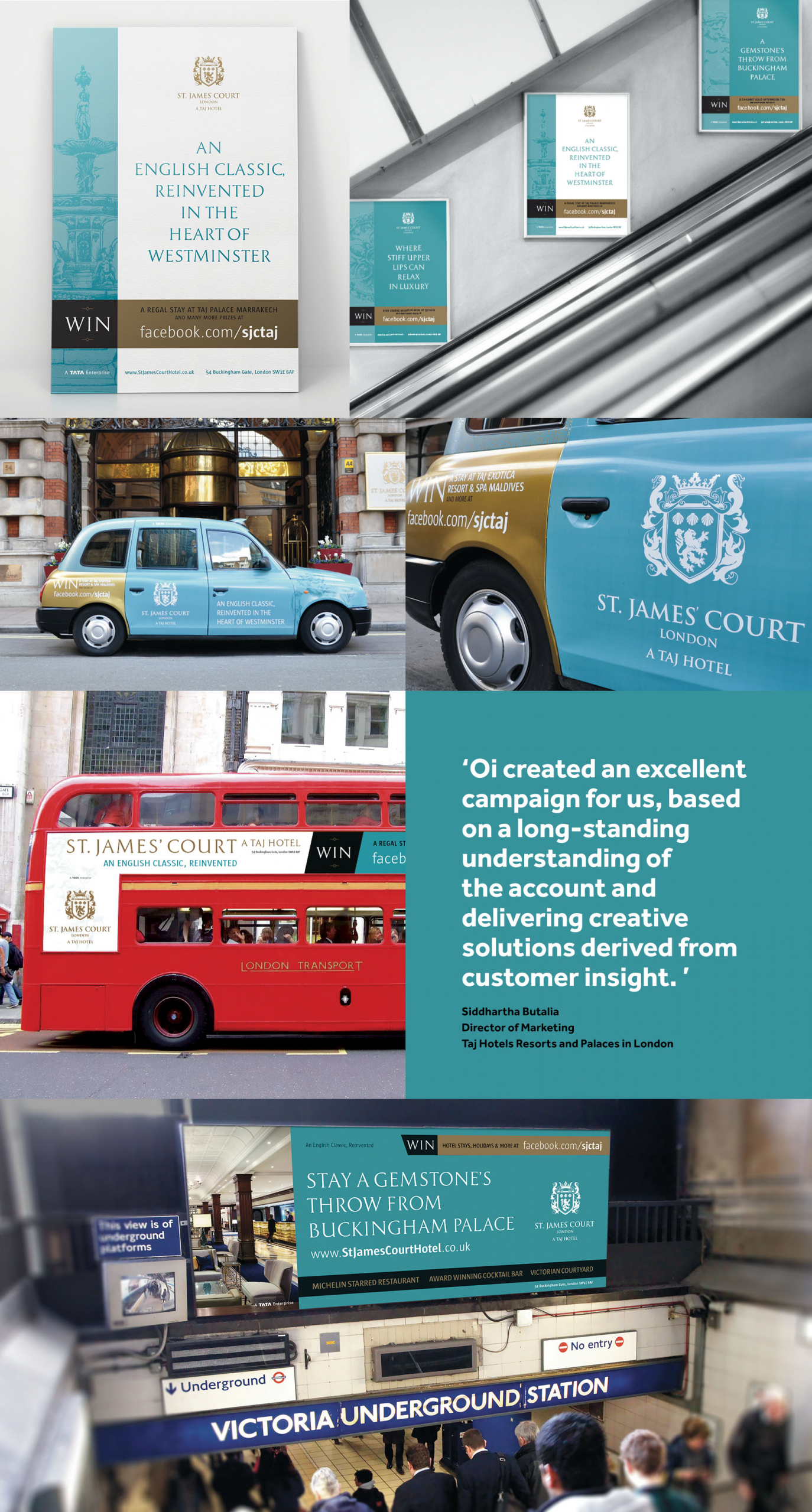 The results
The campaign proved very successful with a three-fold increase in website visits, over 100,000 page views and gained over 4,000 additional fans on Facebook in three months.

The brand launch integrated marketing campaign by Oi for Taj Hotels Resorts and Palaces in London was a platinum winner at the global Hermes Creative Awards.

The Hermes Creative Awards is for creative professionals involved in the concept creation, writing and design of traditional and emerging media. Oi’s ‘English Classics, Reinvented’ campaign was a platinum winner in the communication/marketing campaign category.

The ‘English Classics, Reinvented’ campaign was also nominated for the prestigious DRUM Marketing Award for ‘Re-brand/Re-launch Strategy of the Year’ against finalists including Aviva, Royal Mail, Unilever (PG Tips), Microsoft and ITV. A spokesperson from DRUM said the judging panel was ‘impressed’ by the work while announcing the shortlist for 2016.

Check out some of our other work

The future of island transport

Story of a small island

Getting an island turned on at night